You are here: Latest news / New council building concept design gets the go ahead 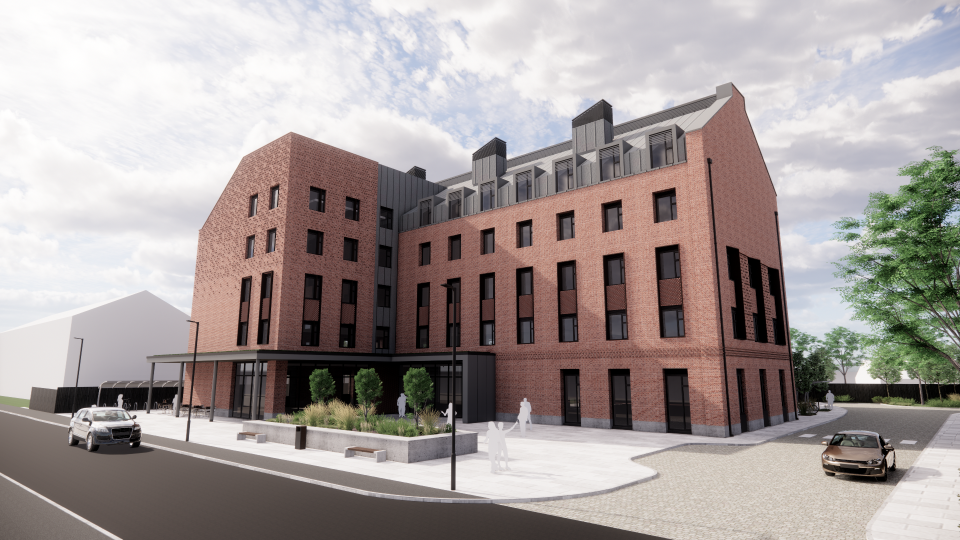 New council building concept design gets the go ahead

The concept design for the new district council building at Didcot Gateway has been approved, and the detailed design process is now getting underway.

South Oxfordshire District Council has revealed the concept design that was approved at its most recent Cabinet meeting. The new building will be home to the offices the council shares with the neighbouring Vale of White Horse District Council – the two councils work jointly across most of their services and share staff.

The concept design for the building is available to view on the council’s website. The building will be located opposite the railway station in Didcot and was influenced by the town’s industrial and railway heritage. It has also been designed to meet the principles set out in the Didcot Garden Town delivery plan, meaning it reflects both local history and the town’s future.

In line with the councils’ commitments to tackle the climate emergency, the offices will be built to meet a strict sustainability standard, known as the BREEAM Excellent standard – this would put the building in the top 10 per cent of new non-domestic buildings in the UK in terms of its sustainability performance. To help meet that standard, the building will feature solar panels on its roof and potentially even on covered visitor parking spaces.

To help the councils meet their commitments to building stable finances, the building will also include commercial office space the councils can let to a third party.

The location opposite the station should help in our efforts to encourage sustainable commuting and the flexible space will accommodate organisations, which like the council want to explore more flexible ways of working after the pandemic.  The central site will also be more accessible to the public than the current offices at Milton Park.

Cllr Andrea Powell, Cabinet Member for the new building project, said: “The new building will help us make significant strides to becoming carbon neutral, and the long-term rental income from the commercial offices will also help us put the council on a strong financial footing in a time where ongoing finances for councils are filled with uncertainty. We’re very excited to be able to celebrate and embrace Didcot’s railway heritage with our building too.”

The councils have been working in temporary offices at Milton Park since June 2015, five months after their shared headquarters in Crowmarsh Gifford were burnt down in an arson attack. The councils had been planning to build new offices at Crowmarsh but having adapted successfully to a mix of home and office working during the pandemic, they’re taking the opportunity to build smaller headquarters on land owned by South Oxfordshire District Council at Didcot Gateway. The site was already due for regeneration and is ideally placed next to public transport connections, making it an environmentally sustainable choice.

Residents, along with local businesses and other organisations, will have a chance to have their say on the proposals for the new building when the planning application is submitted in due course. The councils will announce when the application has been submitted and will actively invite local residents to take part in the consultation.

As a separate project, both councils are working in partnership and consultation with other landowners at the site, including Homes England and Soha, to create a ‘masterplan’ for Didcot Gateway ahead of its regeneration. The masterplan will then be provided as a supplementary document alongside all of the planning applications that are put forward for the site.