You are here: Latest news / Fly-tipper in Sonning Common ordered to pay more than £2,000 plus community service 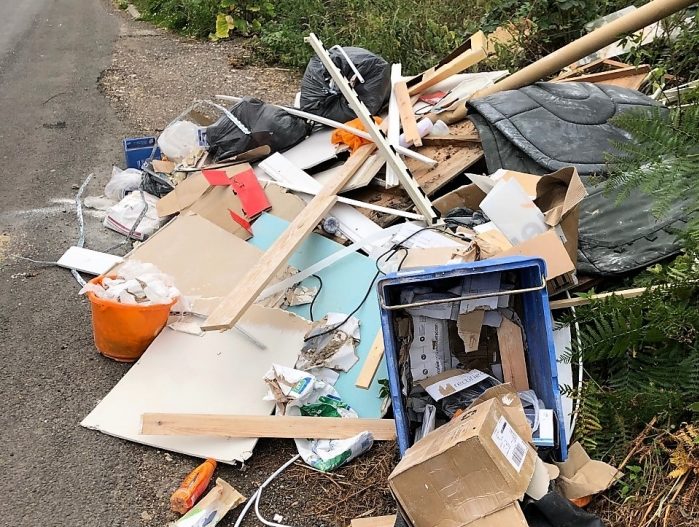 Fly-tipper in Sonning Common ordered to pay more than £2,000 plus community service

A Reading man was ordered to do 120 hours community service and pay more than £2,000 after South Oxfordshire District Council successfully prosecuted him for fly-tipping charges after building waste was dumped on land near Sonning Common.

Scott Allaway, aged 34, of Green Road, Reading, appeared at Oxford Magistrates’ Court on Monday 17 February and pleaded guilty to charges relating to fly-tipping and not having a waste carrier licence.

The magistrates imposed a community order of 12 months with 120 hours of unpaid work for the fly-tip and a fine of £800 for not having a waste carrier licence.  They also awarded the council its costs of £1112.20 and a victim surcharge of £90.

On 2 August 2019 Mr Allaway had been working on a property at Goring Heath and arranged with the property owner that for an extra fee of £40 he would dispose of the building waste such as wood, plaster and several black bags, despite him not having a waste carrier licence.

He reassured the owner that it would be disposed of responsibly and then unloaded it on land between Peppard Road and Kiln Road next to the Bird in Hand pub near Sonning Common.

The fly-tip was witnessed by a passer-by who got in touch with the council. The owner of the property in Goring Heath was also informed about the fly-tip and instructed Mr Allaway to clear the rubbish away, which he did.

On 12 August the property owner contacted the council, which was investigating the fly-tipping incident.

Cllr David Rouane, South Oxfordshire District Council cabinet member for housing and environment, said: “We take the issue of fly-tipping extremely seriously and will prosecute those found responsible for it. We also urge residents to ensure that if someone is disposing of waste for them, they must have a waste carrier licence.”

Charges are as follows:

Mr Allaway was charged that on or about 2 August 2019 on land between Peppard Road and Kiln Road adjacent to the Bird in Hand Public House, Sonning Common Oxfordshire, he did deposit or knowingly cause or knowingly permit controlled waste namely building  waste including wood, black bags and other miscellaneous items to be deposited on the said land, without environmental permit being in place authorising such deposit. Contrary to Section 33 (1) and (6) of the Environmental Protection Act 1990 as amended

Mr Allaway was charged that on or about 2 August 2019 he transported controlled waste namely building waste including wood, black bags and other miscellaneous items with a view to profit whilst not being registered as an authorised person to transport such waste. Contrary to Section 1 of the Control of Pollution (Amendment) Act 1989